King’s College Library, which has been in continuous existence since the College’s foundation in 1441, is housed in a purpose-built building designed by William Wilkins (1778–1839), and completed in 1828. Prior to this the Library was housed in various other buildings in College, and from 1570 until 1828 the Library occupied a number of side chapels in the College’s magnificent Chapel. This is where the library was housed when, in ca. 1685, one Michael Mills (KC 1683) was appointed ‘Keeper of the Publick Library’, and a copy of what might be considered his job description survives today in the College Archives (KCAC/6/1/1). The full title of that document is: ‘Articles, Conditions and Covenants upon which the Provost and other officers of King’s Coll: in Cambridge have admitted Michael Mills Schollar of the said College to be the Keeper of the Publick Library of the said College’. The second half of the same document sets out a copy of the rules for those who used the library, thought to date from ca. 1709–10. 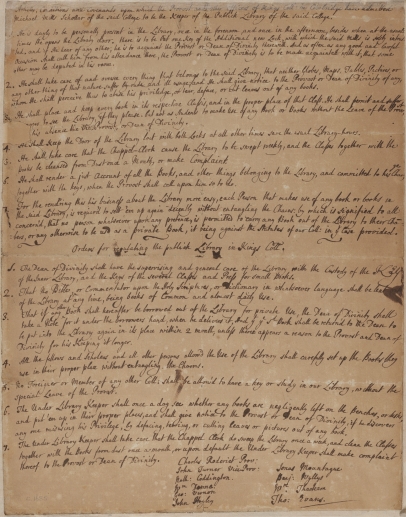 Born in Windrush (Gloucestershire), Mills took up his role around 1685 whilst still a scholar (he became a fellow in 1687), and this document offers an interesting insight into the College’s Library in the late seventeenth century. Reporting directly to the Provost and Dean of Divinity, Mills had ‘dayly to be personally present in the Library, once in the forenoon, and once in the afternoon, besides when at the usual times He opens the Library door’. In addition to keeping the books in good order, he also had to ‘take care and oversee every thing that belongs to the said Library, that neither Globes, Maps, Tables, Pictures, or any other thing of that nature suffer by rude and ill usage.’

Mills was allowed to ‘permit and suffer Strangers to see the Library, if they please, but not as Students to make Use of any Book or Books without the Leave of the Provost.’ Any member of College reading books in the library was ‘requir’d to sett ‘em up again decently without entangling the Chains: by which is signified to all concern’d, that no person whatsoever upon any pretence is permitted to carry any Book out of the Library to their Chambers’.

Bookcase (made in 1659) with money bequeathed by Nicholas Hobart (NH). It no longer has its chains or the chaining mechanisms attached (Photograph: Adrian Boutel and Elizabeth Upper)

As this shows, King’s Library at that time (like many libraries) was a chained library, that is, a chain was attached to the front board of each book which was attached in turn to the bookcase which housed it to prevent it from being removed. It was not until 1777 that the College finally paid someone for nine days’ work to remove the remaining chains from all the books. One book in King’s Library which still has its chain attached is a splendid calf-bound donors’ book in which donations of books were recorded along with the name of each donor from 1612 onwards (KCAC/6/2/1/1), and three of the magnificent bookcases which housed such books and which were constructed during the second half of the seventeenth century—and would therefore have been kept in order by Michael Mills—remain in the Chapel to this day. 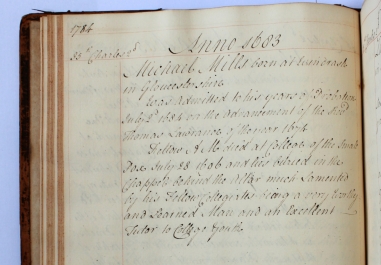 Extract from: Anthony Allen, Skeleton … or A Catalogue of all the Provosts, Fellows and Scholars, of the King’s College

Michael Mills died at a young age on 28th July 1696 and according to one eighteenth-century biographer of Kingsmen (Anthony Allen, 1685–1754), his passing was ‘much lamented by his Fellow Collegiates being a very Worthy and Learned Man and an excellent tutor to College youth’. Mills had succumbed to smallpox and was buried behind the altar in the Chapel: two fates unlikely to befall present-day College librarians.