In 1941, Kingsman Judge Edwin Max Konstam C.B.E. donated to the College a collection of books and papers from the library of his late sister, the acclaimed actress Gertrude Kingston (1862–1937). 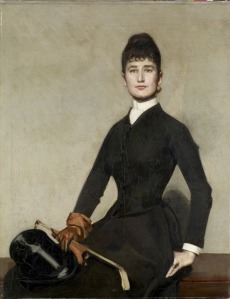 Kingston (born Gertrude Angela Kohnstamm) had many strings to her bow. Passionate about art from an early age, she studied painting in Paris and Berlin, going on to publish three illustrated books. She developed an interest in lacquer  work and exhibited her creations in this medium in New York in 1927. She was a popular public speaker, using this talent initially on behalf of the women’s suffrage movement, and later in life also for the Conservative Party.  She taught public speaking to others, and wrote many journalistic articles.

However, it was as an actress that Kingston was best known. Her acting career moved from amateur involvement as a child to professional work after her marriage in 1889, necessitated by deficiencies in her husband’s income.  Adopting Kingston as her stage name, she made a reputation for herself on the London stage, acting in Shakespearean and classical as well as contemporary roles. One of the most notable of these roles was as Helen of Troy in Euripides’ The Trojan Women. Kingston undertook this role at the suggestion of playwright George Bernard Shaw (1856–1950).

Kingston appeared in a number of productions of Shaw’s plays, and seems to have been highly regarded by him. The pair were in regular correspondence, as the large number of letters from Shaw to Kingston amongst the papers given to the College by her brother testify. Kingston also owned several copies of early published editions of Shaw’s plays, some of which are likely to have been her working copies, since they contain performance annotations.

One of the earliest of Shaw’s plays in Kingston’s collection is a first edition of Press Cuttings dating from 1909. This play is a satire of the anti-suffragist lobby, so is likely to have appealed to her feminist sensibilities. The cover has a label proclaiming “Votes for women”:

The title character of Shaw’s play Great Catherine was written specifically for Kingston,  and in November 1913 she duly starred in its first production at the Vaudeville Theatre in London.

Shaw’s inscription on the half-title page of Kingston’s copy of Heartbreak House, Great Catherine, and playlets of the war identifies her closely with the lead role and underlines the high regard he had for her: 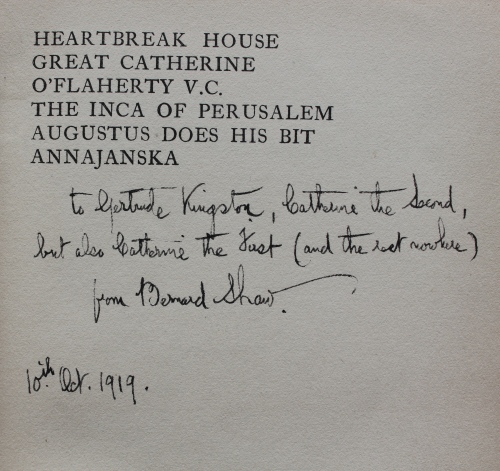 This is one of the volumes containing pencil annotations within the text, likely to have been made by Kingston in order to help guide her performance: 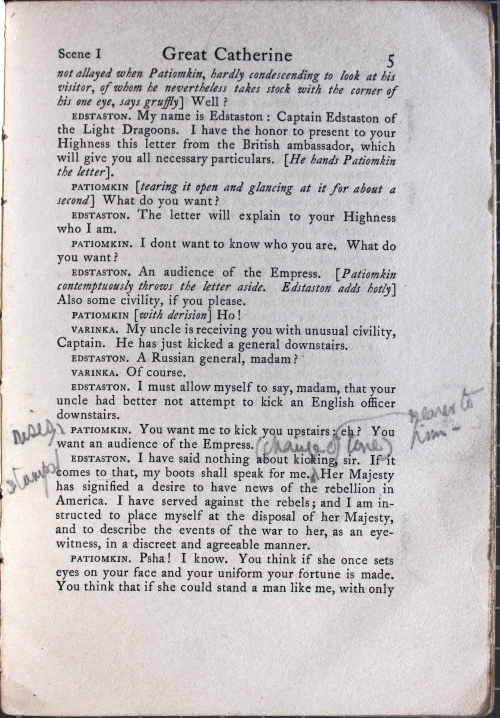 In 1921 Gertrude Kingston joined the British Rhine Army Dramatic Company in Germany. She reprised the role of Lady Waynflete in Shaw’s 1901 play Captain Brassbound’s Conversion, having first played this character in 1912. The front cover of Kingston’s copy of this play gives instructions in several languages on where it should be returned if she should happen to misplace it: 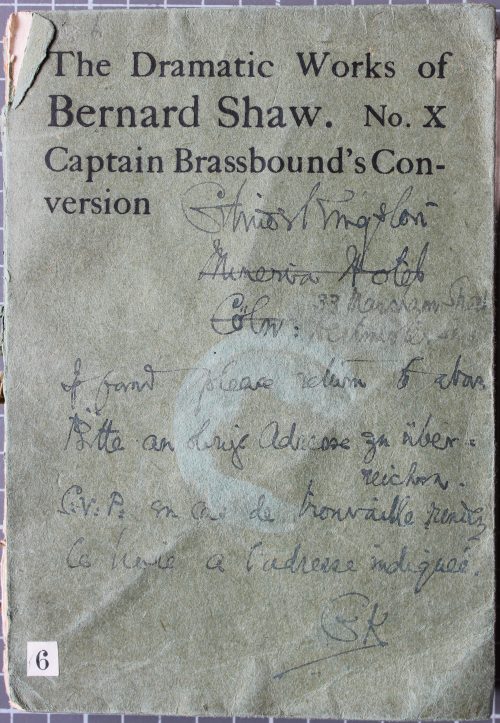 Tucked inside the play is a leaflet advertising this production and other forthcoming “Army amusements” at other theatres: 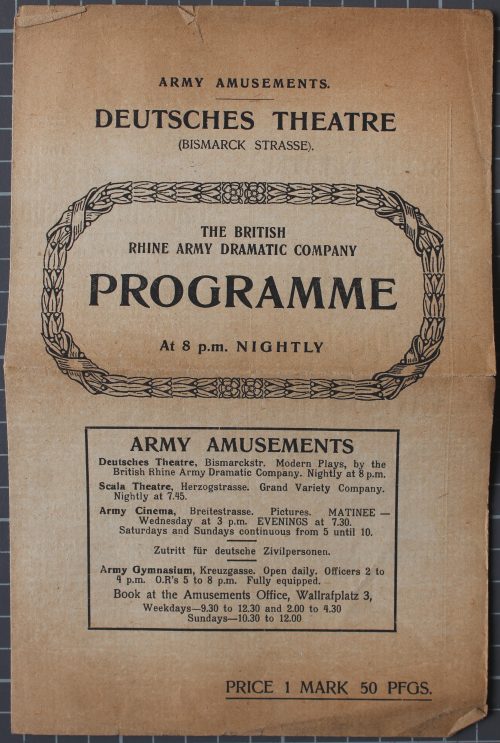 Collections such as these provide a fascinating glimpse into a long-vanished theatrical world.

The Vagaries of English Spelling

When George Bernard Shaw died in 1950, he bequeathed a substantial portion of his estate to finance the creation of a new English phonemic alphabet. The word ‘ghoti’, i.e. ‘fish’ (gh, pronounced [f] as in tough; o, pronounced [ɪ] as in women; ti, pronounced [ʃ] as in nation), is often cited as an example of the irregularities in English and misattributed to Shaw. While his endeavours to simplify English orthography are well known, he is not the first one to have taken steps towards this end.

The Shavian Alphabet, devised in 1958 by Kingsley Read and three other entrants who won a competition to create an economical writing system for English, as stipulated in Shaw’s will

The Keynes Bequest features a first edition of Epistolae Ho-Elianae: Familiar Letters Domestic and Forren (1645) by James Howell (ca. 1594-1666), in which the author argues in the epilogue: ‘Amongst other reasons which make the English language of so small extent, and put strangers out of conceit to learn it, one is, that we do not pronounce as we write, which proceeds from divers superfluous letters, that occur in many of our words, which adds to the difficulty of the language’. 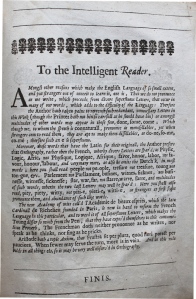 Keynes wrote to Shaw on 5 January 1946 to draw his attention to Howell, ‘the first pioneer whom you are following’. The carbon copy of the letter, initialled by Keynes, is preserved in the book and accompanied by his transcription of Howell’s epilogue ‘To the Intelligent Reader’. This highlights the importance of cataloguing the collection, as it throws light on Keynes himself, his book-collecting habits and uncovers new correspondence between him and his illustrious friends. 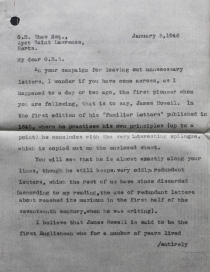 Later this year, the English Spelling Society will host the first International Spelling Congress to come up with proposals to update the English spelling system. While the implementation of such recommendations is likely to face major obstacles, the case for simplification has been made compellingly in a 2003 study which investigated literacy acquisition rates in 13 languages, and concluded what Howell had already highlighted in 1645: ‘Children from a majority of European countries become accurate and fluent in foundation level reading before the end of the first school year. […] The rate of development in English is more than twice as slow.’

In 1991, the Académie française recommended a number of ‘rectifications orthographiques’ to regularise French spelling, which, though largely ignored at first, have now become widely accepted. The Germans too introduced an orthography reform in 1996, which has been adopted throughout German-speaking countries after some initial controversies and teething problems. So shud Inglish follou sut?