Another Portrait of Mr. W. H.

As we’re marking the 400th anniversary of Shakespeare’s death, this book from the Keynes Bequest could not be more topical. England’s Helicon, an anthology of Elizabethan poems first printed in 1600, includes contributions by Christopher Marlowe, Sir Walter Raleigh, William Shakespeare, Sir Philip Sidney and Edmund Spenser.

In an 1812 reprint of the third edition (1614) is the carbon copy of a letter from John Maynard Keynes to Dadie Rylands dated 6 February 1944 and initialled in ink by Keynes. Rylands was a Fellow at King’s and a noted Shakespeare scholar who also directed several plays for the Marlowe Society and acted as chairman of the Cambridge Arts Theatre between 1946 and 1982.

Keynes writes: “Is this a new theory of the Sonnets? In England’s Helicon, published in 1600, there are two poems signed W. H., otherwise unknown, and no editor has attached any plausible conjecture to the initials. […] It would be pleasant to suppose that this Mr. W. H. is the same as the other”.

The first 126 of Shakespeare’s Sonnets (1609) are addressed to a “fair youth”, and the whole work is dedicated to a certain “Mr. W. H.”. The identity of the dedicatee remains a mystery, and possible contenders include Shakespeare’s patrons, Henry Wriothesley, 3rd Earl of Southampton (1573-1624), and William Herbert, 3rd Earl of Pembroke (1580-1630).

Keynes seems to have failed to check the “Index of the Names of Authors” at the beginning of the book, where W. H. is tentatively identified as “Wm. Hunnis?” The editors, S. E. Brydges and Joseph Haslewood, state in the biographical notice of W. H.: “I recollect no writer to whom these initials may apply, unless William Hunnis, who seems to have lived too early to have been a contributor to this volume. […] Qu.? William Herbert?” The poet William Hunnis, who died in 1597 and could have therefore known Shakespeare, was in the service of William Herbert, 1st Earl of Pembroke (1501-1570) and grandfather of Shakespeare’s patron, the 3rd Earl of Pembroke. So there is a connection with Shakespeare there, albeit a tenuous one. 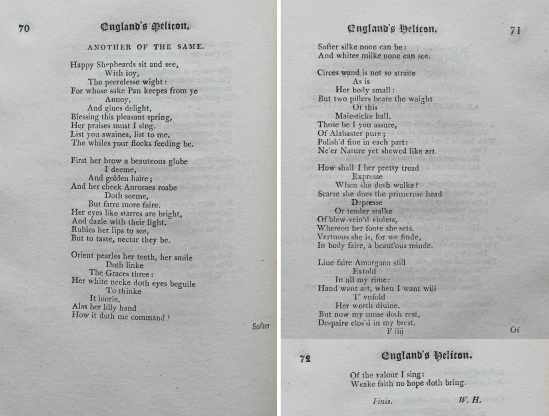 As shown in a previous post on James Howell’s Epistolae Ho-Elianae (1645), Keynes’s book collecting was not merely a matter of accumulating items, as he actively engaged with the issues raised in these works and shared his ideas, thoughts and opinions with friends. But going back to his original question. Could the W. H. in England’s Helicon really be the mysterious dedicatee of Shakespeare’s Sonnets? Over to Shakespeare scholars.

The untimely death of Henry Frederick, Prince of Wales was met with universal sorrow across the land in 1612. The national outpouring of grief is probably comparable to that witnessed in the aftermath of Princess Diana’s death in 1997. Prince Henry (1594-1612), the eldest son of James I and brother of the future King Charles I, was praised in life by authors including George Chapman, Sir John Davies, Michael Drayton, and Francis Bacon. There was a proliferation of mourning pamphlets and funeral sermons following the popular Prince’s death at the age of 18 from typhoid fever, and he was mourned by such luminaries as Thomas Campion, George Herbert, and Sir Walter Raleigh. Prince Henry was the patron of the poet Josuah Sylvester (1563-1618), who expressed his sorrow in Lachrimae lachrimarum (1612), one of the earliest examples of a book containing black mourning pages: 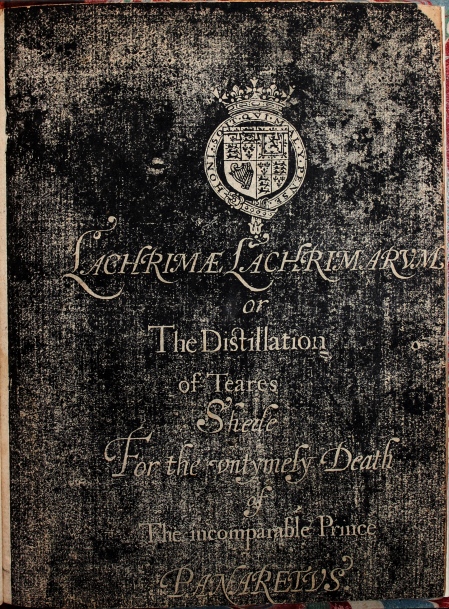 The tears of tears: title page of the first edition of Lachrimae lachrimarum; or, The distillation of teares shede for the untymely death of the incomparable Prince Panaretus (London: Humfrey Lownes, 1612; Keynes.C.12.8).

The sense of grief is compounded by a black page with a woodcut of the royal arms on every verso, and mourning borders with skeleton frames on each recto:

While tears are only mentioned in Sylvester’s book, these are shown explicitly in Christopher Brooke’s Two Elegies (1613), which features a pattern of tears with a quotation from Ovid’s Epistulae ex Ponto, 3.1.158: “Interdum lachrimae pondera vocis habent” (sometimes tears have the same weight as words):

Variations on the black mourning page were used widely well into the 18th century. The premature death of John Churchill, Marquess of Blandford (1686-1703), who died here at King’s College on 20 February 1703, was lamented in William Congreve’s The Tears of Amaryllis for Amyntas (1703). The title page is framed within a mourning border of black blocks:

The black mourning page may be a technique that originated in the 17th century, but one of the most well-known examples of this practice is to be found in the 18th century, namely in Laurence Sterne’s novel Tristram Shandy (1759-67), which is revolutionary in its use of unconventional typographical devices such as blank and marbled pages. Yorick’s death in vol. 1 is followed by a black mourning page:

Today is Blue Monday, allegedly the gloomiest day of the year, so we thought this would cheer everyone up. And let’s look on the bright side: if Prince Henry had lived to become King, he would have probably been beheaded during the English Civil War, as happened to his younger brother Charles I, so it looks like he had a lucky escape after all…