Judging a Book by its Cover

While most of the books in the Keynes Bequest have been acquired for their intellectual content, charting the history of European thought, there is one section in which the items have been collected primarily because of their physical characteristics, namely the binding. Every book bound before the early 19th century is a unique handcrafted object, so no two bindings can be genuinely identical. Recording the binding information when cataloguing a rare book is important as it gives us an indication of its provenance as well as how the book was used, regarded and circulated. Below is a selection of some of the most interesting items in the ‘binding’ section of the Keynes Library.

This copy of Les Pseaumes de David (1668) features an ornamental binding in goat-skin from the atelier de Charenton, characterised by corner-pieces and fleurons incorporating several pointillé motifs; on the board edges is a decorative roll in the style of the binder Antoine Ruette (1609-1669). Four stud holes are visible at the centre:

Keynes.Ec.7.4.13 is an example of a book judged solely by its cover, being a copy of an obscure Italian play on St. John the Baptist which seems to have been consigned to oblivion by literary history, but whose binding features an aesthetically pleasing symmetrical double-panel design with drawer-handle and leaf ornaments tooled in gold:

There are also a number of armorial bindings in this section with interesting historical associations. We have a copy of Notizie per l’anno 1759, a volume of a statistical and administrative annual printed in Rome from 1716 to 1849, the precursor of the Annuario pontificio. Again, the content of the book is probably less interesting than the binding, which features the arms of the book’s dedicatee Cardinal Carlo Rezzonico (1724-1799), nephew of Pope Clement XIII, gold-stamped at the centre, and corner-pieces with elaborate floral decorations:

Going back to France, this copy of René Budel’s De monetis, et re numaria (1591) has the coat of arms of the noted French historian and bibliophile Jacques-Auguste de Thou (1553-1617) and of his second wife Gasparde de la Chastre blocked in gold at the centre of each cover. The fact that de Thou and his wife were already dead when this volume was added to their library is indicated by the addition of an urn above the two coats of arms. Underneath them, and on each spine panel, is the couple’s monogram IAGG. De Thou’s son François continued to add books to his late father’s library using this version of his coat of arms:

And finally something closer to home: a 16th-century English blind-stamped volume bound by Garret Godfrey of Cambridge (d. 1539), with a panel design formed by a roll containing a lion, a wyvern, and a gryphon; the floral ornaments feature the binder’s initials G. G. The metal clasps, catch plates and leather straps are intact: 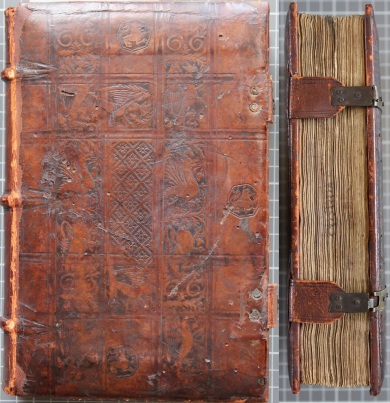 Some useful online resources on bookbinding: