A summer holiday in the Lakes

The ongoing project to catalogue the Library’s Bicknell Collection of books relating to the Lake District [see earlier blog post] continues to uncover fascinating items, not least among them being a small leather-bound, handwritten journal, documenting a family holiday in the Lakes in late August and early September 1877. 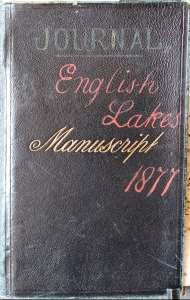 The journal was written by one of Peter Bicknell’s uncles, Claude Lynnford Bicknell (1860-1882), who would have been 17 at the time. He travelled by train from his home in Beckenham, Kent, with his parents and his sister, Kathleen. Gentle sibling rivalry is suggested by a note on the back of the title page of Claude’s journal, which aims to dissociate it from his sister’s diary, referred to as “… the establishment round the corner.”

Bicknell.148 “N.B. I beg to state this journal has no connection with the establishment round the corner, viz. a journal edited by Miss KE Bicknell.”

The family were initially based at Cloudsdale’s Crown Hotel, in Windermere, moving after a week to the Borrowdale Hotel, Derwentwater.  Tucked into the journal are various travel ephemera, including this leaflet advertising the Crown: 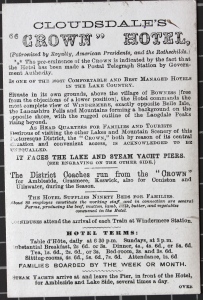 Claude has an engaging style of writing, and much of the pleasure to be derived from reading the journal is contained in his wry (albeit often rather snobbish) observations regarding the people he encounters, and his grumbles and gripes about topics such as the weather and the quality of the hotel food. 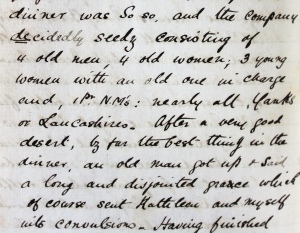 Bicknell.148 page 2: “Dinner was so so, and the company decidedly seedy consisting of 4 old men, 4 old women; 3 young women with an old one in charge and […?] N.M’s: nearly all Yanks or Lancashires. After a very good desert, by far the best thing in the dinner, an old man got up & said a long and disjointed grace which of course sent Kathleen and myself into convulsions.” 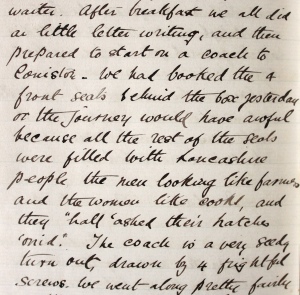 Bicknell.148 page 14 “…all the rest of the seats were filled with Lancashire people, the men looking like farmers and the women like cooks … The coach is a very seedy turn out, drawn by 4 frightful screws.”

Occasionally Claude’s complaints veer into outright hyperbole, as seen most clearly in his reaction to heavy rain spoiling plans to go fishing on the first day of the holiday. With a wonderful turn of phrase he writes “Well, of all the horrid, disgusting, inhuman, blackguard days that were ever invented, to-day has been the very worst”. 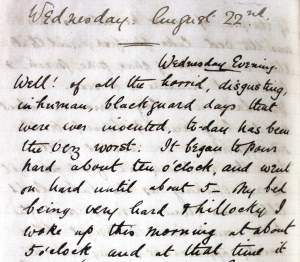 Better weather eventually allowed the family to make several fairly successful fishing trips, and to enjoy walks and excursions to local beauty spots. Claude took a turn rowing the boat during one fishing trip, and seems to have been very pleased with his performance:

Bicknell.148 page 9: “My rowing was a very superior article and I caught a good many shell fish (crabs) & ducked every one in the boat several times.”

In typical teenager fashion however, he bemoans the decision of his mother to forbid him from going swimming:

Bicknell.148 page 12: “Bye the bye I wish to record here that during this day she refused to allow me to bathe in the lake. I think she imagines I shall drown in 20 or 30 feet of water because I am only accustomed to about 7.”

Illustrations in the journal are provided by engravings that Claude has repurposed from books or tourist pamphlets, and he is careful to note where artistic license has been employed: 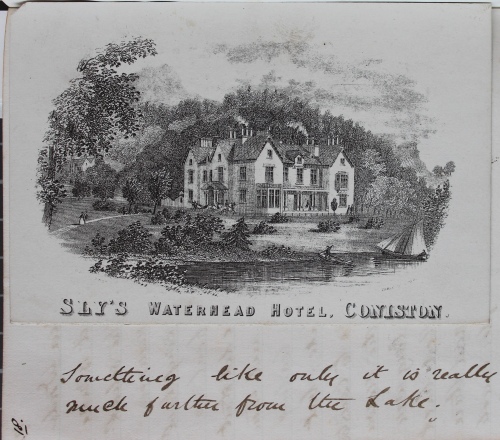 Bicknell.148 page 18 “Something like only it is really much further from the lake”

The journal ends rather abruptly on Sunday the 2nd of September, with no indication as to whether this was actually the end of the holiday or simply the point at which Claude got bored with writing an account of each day. The final paragraph is slightly bizarre, featuring as it does, four alligators that apparently resided at the hotel!

Bicknell.148 page 66 “During the day the number of people flocking to see 4 seedy little alligators which belong to the hotel was wonderful. They came in a string from morning to night.”

Claude went on to study at Trinity College, Cambridge, matriculating in 1879. That same year he was awarded a silver medal for political geography by the Royal Geographical Society. Sadly, he only lived a few more years, dying in 1882. It appears he was struck by a cricket ball at Fenner’s cricket ground in Cambridge. It seems likely that his untimely demise made his journal a treasured keepsake for his family, ensuring that it was preserved for posterity.