A couple of months ago we curated an exhibition featuring items highlighting various aspects of the history of King’s College Library over the centuries. Below you will find some of the exhibits.

From the late sixteenth century until the current library opened in 1828, King’s Library occupied five of the side chapels on the south side of the famous Chapel. For most of this period it was a chained library. This book is one of a few to have survived with the original chains intact.

Theatre was one of John Maynard Keynes’ particular areas of interest and his book collection includes many plays. He founded the Cambridge Arts Theatre in 1936. This is a reprint of the second quarto of Romeo and Juliet that was published in 1599. All modern editions are based on this version, which is considered to be the most complete and reliable text of the play.

William Shakespeare, The Most Excellent and Lamentable Tragedie, of Romeo and Juliet
London: Printed [by William Stansby] for John Smethwicke, [1622] (Keynes.C.6.4)

In 1638 Thomas Goad, a Kingsman and the son of Provost Roger Goad, who had been responsible for restoring the Library in the side chapels in King’s after a period of neglect, made provision in his will for the annual profit from some land he owned at Milton (near Cambridge) to be used in perpetuity to purchase divinity books for the Library. This was listed each year thereafter in the bursar’s account books as ‘Library Money’, and was spent on books and the upkeep of the bookcases and building.

This is one of the books listed on the inventory of books bought in 1697–98: paid ‘to Mr. Bugg for his book’. In this case the book appears to have been bought directly from the author. 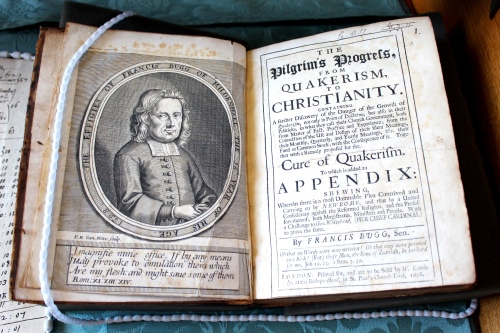 The volume below records donors of books to King’s College Library from about 1600 to about 1710, with details of the volumes they donated. On this page we see details of donations from three Provosts of King’s: Roger Goad, William Smith and Fogge Newton. The volume seems to have left King’s at some point in the 18th century, but was returned in 1784 as a note on the front flyleaf explains:

‘This book was given by the Revd Dr Farmer in 1784. He had found it at a Booksellers, & purchased it that it might be returned to the College. Wm Cooke’