Among the more curious items in the Keynes Bequest is a book entitled Vox Piscis; or, The Book-Fish; Contayning Three Treatises Which Were Found in the Belly of a Cod-Fish in Cambridge Market, on Midsummer Eve Last, Anno Domini 1626 (1627). The title says it all. The circumstances surrounding this catch are detailed in the preface of the book, where we are told that “a codfish being brought to the fish-market of Cambridge and there cut up, … in the depth of the mawe of the fish was found wrapped in a peice of canvase, a booke in decimo sexto, containing in it three treatises bound up in one” (p. 8). The preface was written by the clergyman Thomas Goad (1576-1638), who became a Fellow of King’s College in 1596. In his will, he bequeathed his land in Milton to the College, “to the intent that the whole yearlie profitt thereof bee faithfullie emploied yearlie for ever in divinitie bookes for the librarie”. Many of these books bear the inscription “Legavit Thomas Goad”. 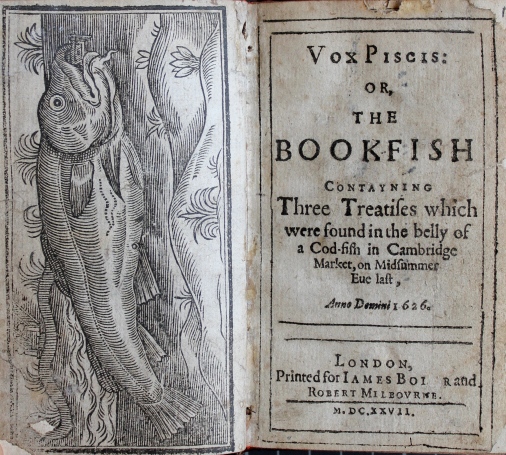 The voice of the fish: title page and frontispiece of Vox Piscis; or, The Book-Fish (Keynes.D.4.15). It is unclear how the book ended up in the fish’s stomach.

Joseph Mede (1586-1639), theologian and Fellow of Christ’s College, helped clean the bundle and decipher the content of the treatises. They were attributed to John Frith (1503-33), the Protestant reformer who was imprisoned in Oxford in a “darke cave, where salt-fish was then kept” (p. 19) and burned at the stake in London on 4 July 1533. Frith received his B.A. degree from King’s, so the book bears a close connection with the College. Incidentally, his tutor at Cambridge, Stephen Gardiner, later played a role in condemning him to death. That’s Cambridge supervisions for you. The Keynes Bequest has two other copies of Frith’s works: A Pistle to the Christen Reader (Antwerp, 1529) and A Boke Made by Iohn Fryth, Prysoner in the Tower of London (Antwerp, 1548), a reply to Sir Thomas More.

The second plate of Vox Piscis, wanting in King’s College copy; this is from the copy in the Cambridge University Library.

If you think this already sounds like something out of Pinocchio, there is more to come. Inside the book is preserved a newspaper cutting with the date “Feb 10 1912” pencilled in by a former owner. The short article recounts how a pocket knife was found inside a silver hake by Thomas Hughes, a salesman at the Wholesale Fish Market in Manchester. It then describes the knife, “one of a superior quality” bearing the makers’ name on each blade, “Newman and Field”, before inviting the owner to come forward and have it returned to them. 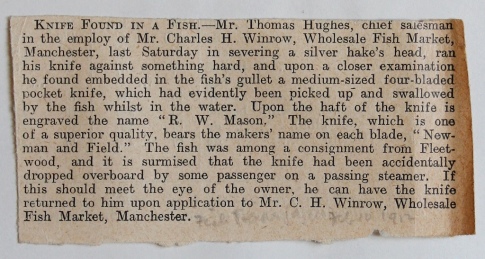 “Knife found in a fish”: newspaper cutting preserved inside the book.

Carrying such items is now probably illegal following the introduction of the Offensive Weapons Act in 1996, but if a knife that matches this description has been missing from your kitchen for the last century, now may be a good time to claim it back.