The Library holds a first edition of Reginald Scott’s Discoverie of Witchcraft (1584), an important early work on the subject, which attacked contemporary received opinion. Scott (d.1599) believed there were no such thing as witches, arguing that those accused were very often beggar women who, having “cursed” those who refused them assistance, were then blamed for anything that subsequently went wrong in the lives of the uncharitable. He claimed that anyone who confessed to being a witch likely did so as a result of delusion or coercion.

Scott also sought to debunk other forms of magic and superstition, devoting part of his book to an explanation of how easy it was to deceive people with sleight of hand and other trickery. This section stands as the first major exposé of the fakery behind conjuring tricks, influencing subsequent works on this topic for centuries to come. This mini blog post highlights a few of those tricks, some weird and wonderful, some bearing very close resemblance to simple card tricks still performed today. An example of the latter is shown below:

“How to tell one what card he seeth in the bottom, when the same card is shuffled into the stocke” (page 334)

Other tricks simply relied upon having a paid accomplice in the audience:

“To thrust a piece of lead into one eie, and to drive it about (with a sticke) betweene the skin and flesh of the forehead, until it be brought to the other eie and there thrust out”, “To cut half your nose asunder, and to heal it againe presently without anie salve”, and “To put a ring through your cheeke” (page 348)

These even include stabbing yourself in the guts and simulated decapitation! 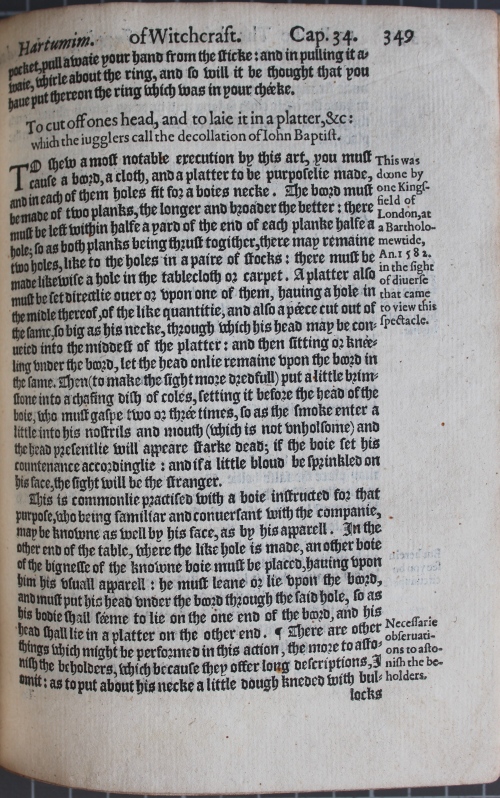 “To cut off ones head, and to laie it on a platter, &c: which the jugglers call the decollation of John Baptist” (page  349)

“To thrust a dagger or bodkin into your guts verie stranglie, and to recover immediatelie” (page 350)

It is amusing to imagine avid Elizabethan readers of this tome rushing off to try out some of these tricks on their unsuspecting friends and family. Hopefully none of these would-be conjurors were subsequently burnt as witches or warlocks!