Perhaps our earliest female benefactor was an influencer, Margaret Beaufort, who is said to have convinced her son Henry VII to give the College enough money to finish building the Chapel. But in the early inventories of Chapel treasures, the first female donor listed is one Marie Hartwell. Who could this woman have been, at a time when Kingsmen were not allowed to be married?

The name Hartwell appears several times in the archives of the early years of King’s. First came three Hartwell Kingsmen who were almost surely brothers[1]: William (KC 1498), Thomas (KC 1503) and John (KC 1505), all London boys. We don’t know much about William except that he gave up his Fellowship after three years, once married. He went off to be a country vicar in Northamptonshire. John became a Carthusian friar at Sheen (Sheen Priory was located in what is now Richmond in London) within a year of becoming a Fellow. Thomas was awarded his Doctor of Divinity, was ordained a priest, held the offices of University Preacher 1515–1516 and Deputy Vice-Chancellor 1526–1527, became vicar at the College’s advowson of Wootton Wawen, Warwickshire in 1523 (where he presided for twenty-two years), and was a Fellow from 1506 until 1527. He may have had a stammer, which could explain this odd entry in the College’s early list of members:

(our 2019 blog ‘An astonishing transformation’ is about the volume that contains this list). Here is a larger extract, with that entry for Thomas at the top and the entry for John at the bottom:

Soon after, Roger Hartwell (KC 1512) came up, also a London boy, of unknown relationship to the others. He was a Fellow until 1526.

Thomas Hartwell the Draper and his wife Marie

But it is a different Thomas Hartwell who brings Marie into the picture, not a Kingsman at all. Three bonds oblige the College to pay (at a date 7 to 12 months after the date the bond was written) to ‘Thomas Hartwell, citizen and Draper of London’:

A fourth bond, written on 15 January 1506/7[2] is for the College to pay 27 pounds 11 shillings 4 pence to a Marie Hartwell, widow of Thomas Hartwell, deceased, lately a citizen and Draper of London, payable on 8 September 1507.

The College bought cloth for its livery (matching members’ clothing) from the Hartwells. Further information about the livery will appear in a subsequent blog post.

The bonds are of nearly identical format, with the amount and date being the only significant differences. The second bond, shown above, translates roughly as:

Know all men by these presents that we, John Argentein, clerk, Provost of the Royal College of the Blessed Mary and Saint Nicholas in Cambridge and the Scholars of that same College are held and firmly bound to Thomas Hartwell, citizen and draper of London, in the sum of 29 pounds 5 shillings and 7 pence of lawful money of England to be paid to that same Thomas, his heirs, his executors or his true Attorney at the feast of St Andrew the Apostle falling next after the present date [i.e. due 30 November 1505] for which payment well and truly to be made we bind ourselves and our successors by these presents. Testifying in this matter, our common seal [of the College] is hung on these presents. Dated at Cambridge in our aforesaid College on the first day of January in the 20th regnal year of King Henry the Seventh [1504/5].

Know all men by these presents that we, John Argentein, clerk, Provost of the Royal College of the Blessed Mary and Saint Nicholas in Cambridge and the Scholars of that same College are held and firmly bound to Marie Hartwell, widow of the late Thomas Hartwell now with God, citizen and Draper of London, in the sum of 27 pounds 11 shillings 4 pence of lawful money of England to be paid to that same Marie, her heirs, her executors or her true Attorney at the feast of the Birth of the Blessed Virgin Mary falling next after the present date [i.e. 8 September 1507] for which payment well and truly to be made we bind ourselves and our successors by these presents. Testifying in this matter, the common seal [of the College] is hung on these presents. Dated in the aforesaid College the 15th of January in the 22nd regnal year of King Henry the Seventh (after the conquest of England) [1506/7].

The first bond must have been paid because 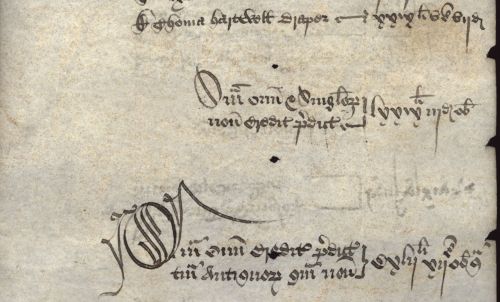 in the rotulus creditorum (list of College creditors) drawn up at Michaelmas 1505[3], he is listed amongst the new creditors, to the value of the second bond (written by Michaelmas 1505 but not due for another couple of months): Thomas Hartwell Draper, 29 pounds 5 shillings 7 pence (the first line in the image above).

1504–1505 seems to have been a tough year for the College, which had to leave unpaid much of the allowance to each of the Fellows and Scholars for a term. To put it in context, the Hartwell debt accounted for over one-third of the new debts of just over 79 pounds (the middle line in the image above); the new debts that year more than doubled the total debt burden for the College—bringing it to a little over 142½ pounds (the final line).

The second bond must have been paid sometime between 1505 and 1507 because no Hartwells appear on the creditors’ roll of Michaelmas 1507. (Sadly, the annual accounts books don’t survive for 1504–1505 or 1505–1506.) The College annual accounts for 1506–1507 do in fact record (in the ‘restitution to creditors’ section) the payment of the third bond: 29 pounds 14 shillings to the Widow of Thomas Hartwell, ‘in full payment for the livery for the preceding year’ (1505–1506). The entry is undated but if the restitution occurred around the end of November 1506 as promised in the bond, then Thomas probably died between April (when the third bond was drawn up with him as beneficiary) and November of 1506. (This of course is how we know he is not the Kingsman Thomas Hartwell, who was still alive 20 years later.)

Marie Hartwell’s donations were given sometime between 1506 and 1529 (they were later additions to the 1506 inventory, and the next inventory was drawn up in 1529). They were:

A Matthew Hartwell gave, again sometime between 1506 and 1529, a banner with Christ and Mary Magdalene.

A Roger Hartwell, also between 1506 and 1529, gave a gilt spoon ‘with a knob’ and his name engraved. The simplest explanation on the evidence available is that he is the Roger who came up in 1512.

And finally there is a Hartwell donation not listed in the Chapel inventories. Apparently the Cambridge University Library at one time had a copy of Solinus’s De memoralibus mundi printed in Paris in 1503, known to have come from the King’s College Library, with the inscription ‘ex dono Joannis Hartwell nuper socius [sic] huius collegii’[5].

In the annual accounts which survive for the years just before 1500, the first payments to the Hartwells for cloth were in 1499–1500. Is it a coincidence that the year after the first Hartwell scholar from London came up, we started buying our cloth from a Hartwell who was a Draper of London? How do the Hartwell Kingsmen of this period (William, Thomas, John and Roger) relate to each other and to the drapers (a different Thomas, and Marie), and do any of them relate to our Hartwell donors (the same Marie, Matthew, possibly the same Roger, and John)? Sadly those facts are not ascertainable from the record at King’s.

[1] http://incunables.bodleian.ox.ac.uk/record/L-159 (L-159 copy 1) is the best evidence, their brotherhood is certainly how the inscription recorded there was interpreted in the chapter ‘Language Arts & Disciplines’ in A Companion to the Early Printed Book in Britain, 1476–1558 (Vincent Gillespie and Susan Powell, ed), 2014.

[2] At that time the calendar year began on 25 March, and thus dates between January and March are often given in both systems to avoid confusion as to which system is being used.

[3] The financial year began at Michaelmas, i.e. ran from September 29 to September 28.

[4] A communion cloth, usually of linen, where the consecrated elements are placed during the Eucharist.