What Everyone Had Been Up To

To lighten your working-from-home need for a bit of local gossip, we present The Brochure (a student publication) from about 1905, with reports on what everyone had been up to.

Catullus was said to threaten his detractors with including them in his verse: ‘At non effugies meos non iambos (But you shall not escape my iambics)’.

This very blog puts paid to Mr Nixon’s piteous cries – the history of the College has been kept, it’s all in the archives. 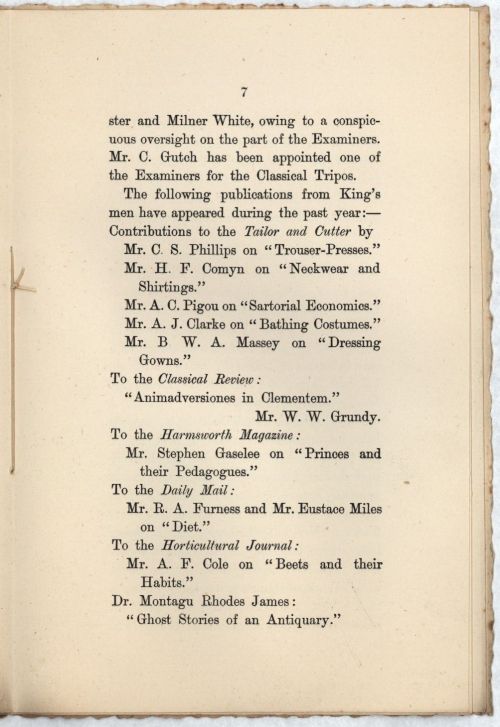 Pigou (half-way down page 7) read History and Moral Sciences (now Philosophy). He started lecturing in Economics only in 1901, the Economics Faculty being established in 1903. Apparently Pigou’s mentor Marshall asked another King’s fellow to ‘speak to Pigou on a personal matter – a rather delicate matter. I saw him coming out of Bowes’ shop in a Norfolk jacket with holes in both the elbows. So bad for the Economics Tripos!’

If you’re worried about your diet for the foreseeable future (i.e. what’s available), you might look up the advice of Eustace Miles (KC 1887) mentioned near the bottom of page 7. A champion at real tennis and an Olympic medalist, Miles published several books on diet for boys and sportsmen in the first few years of the 20th century. He married in 1906 and opened a vegetarian restaurant with his wife in London, to which Margaret Schlegel threatened to take Mr Wilcox in EM Forster’s Howard’s End.  (Forster came up to King’s ten years after Miles.) 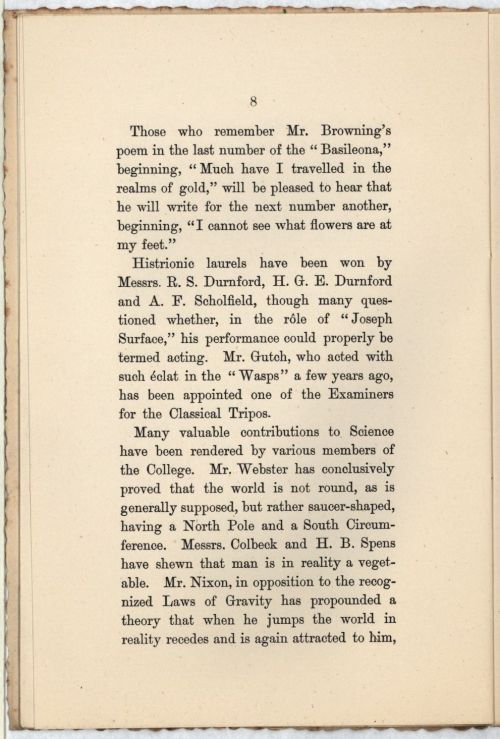 The production of The Wasps mentioned in the middle of page 8 is probably the 1897 Greek play, rather than the better-known 1909 one.

Evangelism at south coast resorts (bottom of page 9) took place through Beach Missions, 150 years old and still lively today. (Under current restrictions we can’t even get into a church on Sunday.) Another such effort at ‘good works’, the King’s Social Work Committee (middle of page 9), was established in 1904. Students subscribed and the funds were provided to College estates for lectures, books and other social activities. It appears also to have been involved with a Mission, later Boys Club, at Barnwell, now the Buddhist Centre.

The Trappists (middle of page 10) were a tongue-in-cheek undergraduate secret society, even now somewhat obscure, that included Eric Milner-White who returned after the war and instituted the Festival of Nine Lessons and Carols here.

The Second Bursar (bottom of page 10) at the time was William Corbett. The post is now called Domus Bursar but don’t go getting any ideas. 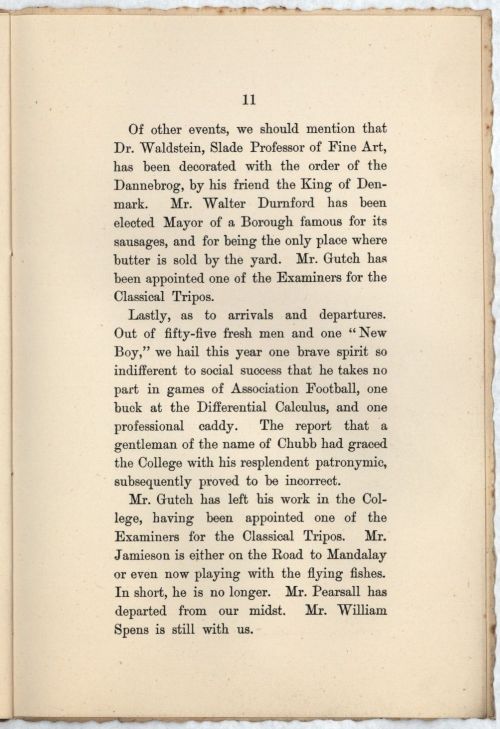 The Victoria County History says that in the City of Cambridge ‘Every Pound of this Butter is roll’d, and drawn out to a Yard in Length, about the Bigness of a Walking-cane; which is mentioned as peculiar to this Place’ (see near the top of page 11). Walter Durnford, later Provost, was indeed Mayor of Cambridge 1905-6.

Though undated, the internal evidence suggests The Brochure was published around 1905.

Whether the abandoned streets and workplaces make you feel like you’re in one of MR James’ Ghost Stories of an Antiquary (page 7), or you’re developing your deipnosophistry (skill at dining – page 10) in the face of erratic food availability, or wishing you could get butter by the inch never mind the yard (page 11), or waiting for travel restrictions to lift so that you can travel with Kipling ‘on the road to Mandalay where the flying fishes play’ (page 11), we wish you well and hope that you and yours stay healthy as long as possible.