A Regal Book of Hours

As we’re approaching Easter, we thought we would share some topical images from a beautiful book of hours recently discovered in the Thackeray collection. Books of hours were medieval devotional books often lavishly illustrated with illuminations and decorations. They usually contained an almanac, selections from the Gospels and Psalms, and various prayers and devotions. With the advent of printing in the fifteenth century, books of hours became more affordable, and manuscript versions were only produced for wealthy individuals.

This volume was published in Paris in 1505, and is remarkable in that it is printed entirely on vellum:

The text is printed in red and black with initials illuminated in red, blue and gold; each page is surrounded by an ornamental woodcut border:

The book also contains many full-page as well as smaller woodcuts. Below is a depiction of the Annunciation: 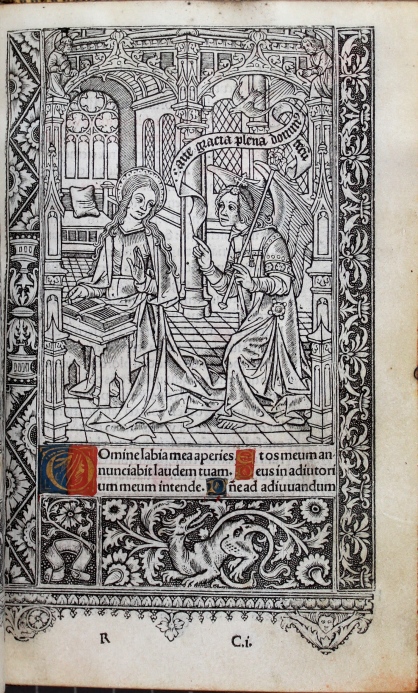 The Annunciation: the angel Gabriel announces to Mary that she will become the mother of Jesus

Books of hours often contained the Little Office of Our Lady, also known as Hours of the Virgin, a liturgical prayer to the Virgin Mary:

“Domine labia mea aperies”: the beginning of the Office of our Blessed Lady

Below is a woodcut of the Tree of Jesse, an artistic representation of Jesus’s ancestors: 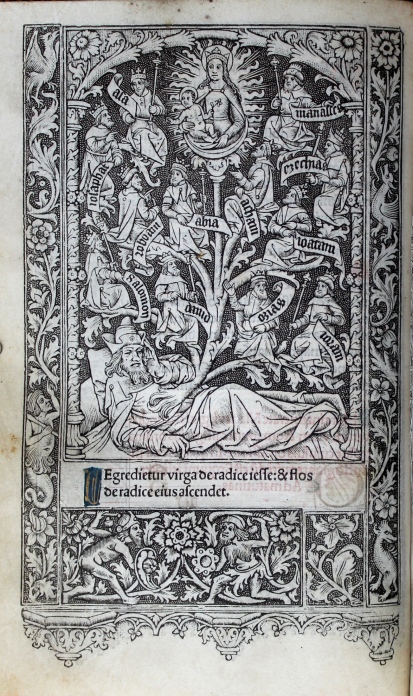 “Egredietur virga de radice iesse: & flos de radice eius ascendet”  [“there shall come forth a rod out of the stem of Jesse, and a Branch shall grow out of his roots”]  (Isaiah 11:1)

Books of hours also contain a selection from each of the four Gospels: 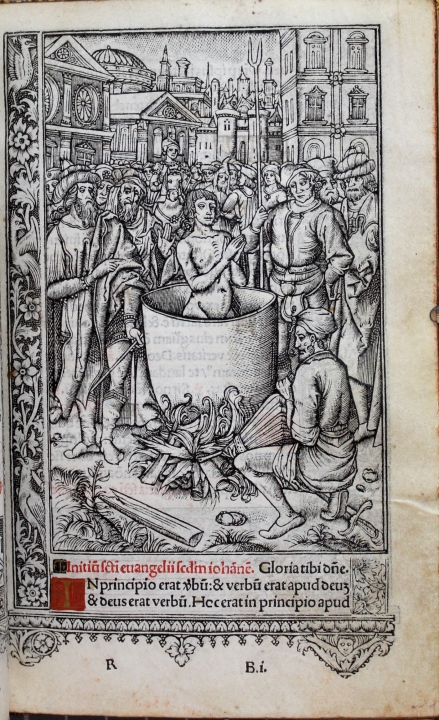 “Initiu[m] s[an]cti euangelii s[e]c[un]d[u]m ioha[n]ne[m]”: the beginning of the Gospel of St. John. The engraving depicts the Evangelist being boiled in oil in Rome in front of the Porta Latina. 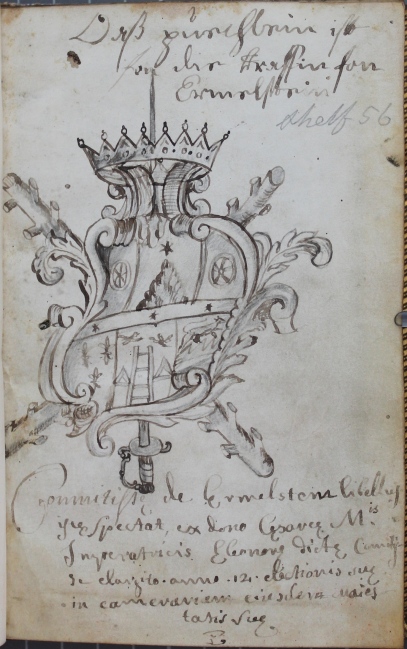 Ownership inscription by the Countess of Ermelstein

Happy Easter from everyone at King’s College Library and Archives.

The Man of Sorrows: Christ surrounded by the instruments of the Passion

This entry was posted in Library and tagged Book of Hours, Countess of Ermelstein, Crucifixion, Empress Eleonore Magdalene of Neuburg, Heritage Lottery Fund, HLF, IJ, Illumination, Rare Books, Thackeray bequest, The Annunciation, The Hours of the Virgin, The Man of Sorrows, Thielmann Kerver, Tree of Jesse. Bookmark the permalink.

One response to “A Regal Book of Hours”